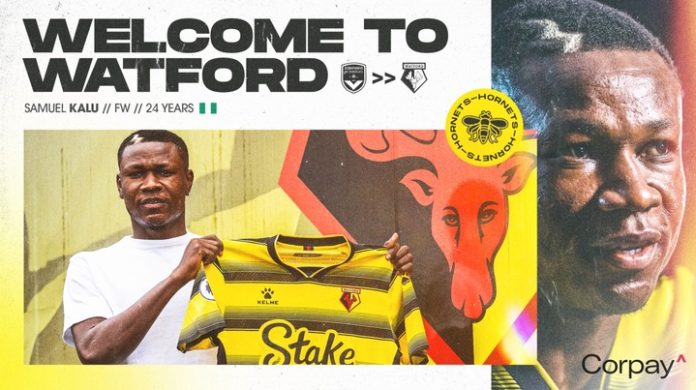 Super Eagles star Samuel Kalu has joined English Premier League side Watford from French Ligue 1 side Girondins de Bordeaux for an undisclosed fee. Kalu was dropped from the squad that represented Nigeria at Africa Cup of Nations (AFCON) 2021 going on in Cameroon.

Kalu will now link up with fellow Nigerian internationals in Watford Peter Oghenekaro Etebo, William Troost-Ekong, Emmanuel Dennis, and recently signed Maduka Okoye who will join them in the summer.

Watford confirmed the signing of Samuel Kalu with an official statement released on their website.

“Watford FC is delighted to announce the signing of Nigerian international winger Samuel Kalu on a deal until June 2025 from French club FC Girondins de Bordeaux,” the club confirmed.

“He will wear the number 28 at Watford. Welcome to the Golden Boys, Samuel!”