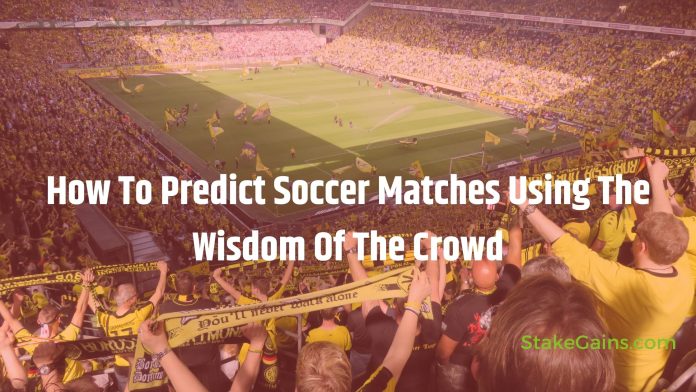 Are you looking for a simple way to predict the results of soccer matches? In this article, we will guide you on how you can get accurate soccer predictions by listening to your friends and neighbors.

Yes, you heard it right. You can get a more accurate idea of how a match will turn out by taking into account what your friends and neighbors say.

This is done using the technique known as the wisdom of the crowd.

The wisdom of the crowd’s phenomenon was first observed in the early 20thcentury by the eminent anthropologist, Sir Francis Galton. When at a livestock fair he observed a competition to guess the weight of a butchered ox.

No one person got the correct weight but Galton calculated the median of guesses as being within 0.8% of the answer, stating that “the middlemost estimate expresses the vox populi, every other estimate being condemned as too low or too high by a majority of the voters.”

Before we get on with how this can be used to predict soccer matches and when not to use it, let’s see one more example.

In May 1968, the USS Scorpion submarine was lost and a large recovery operation was carried out in order to recover it.
In its search efforts, the navy was only able to locate the wreck within a 20-mile range.

In a test of collective wisdom, naval officer, Dr. John Craven, gained individual insights from a wide and varied group of naval/salvage experts and used their collective information to pinpoint a location that turned out to be just 220yds from the wreck of the Scorpion.

So how did these individuals’ unrelated opinions average out to such accuracy?

Just like locating a shipwreck, the results of sporting events cannot be known before the match takes place, except for fixed matches, yet even under these conditions, the crowd does generally provide an accurate assessment of the respective probabilities of the outcomes.

Odds gain accuracy from the wisdom of the crowds by shaping a bookmaker’s opening betting odds and exposing it to public appraisal. Very sharp analysts and bettors have a more informed betting decision after they’ve seen the bookmakers opening betting odds. This is what happens here at StakeGains.

StakeGains helps individual bettors have a more informed decision because our analysts analyze other factors not just the wisdom of the crowd.

As markets become more liquid i.e. more people voice their sports betting prediction by placing bets the market generally moves to its most efficient position, just as the more guesses of the number of sweets, the more accurate the average guess.

For example, on May 2nd, 2016, the English football club Leicester City FC became the champions of the English Premier League.

At the beginning of the season in August, odds of 5000/1 were offered for betting on Leicester City becoming the champions, amusingly the same odds were offered for Elvis Presley being found alive in 2016.

This gives an indication of how low the probability of Leicester City becoming champions was deemed by the English bookmakers.

But Leicester City did win the title, which meant that English bookmakers had to pay out £25 million, the biggest loss in British history on a single sporting market (Rayner & Brown, 2016).

Odds gain accuracy from the wisdom of the crowds by shaping a bookmaker’s opening line and exposing it to public appraisal.

There are certain scenarios that will render the wisdom of the crowd ineffective. Check them out here;

But if your crowd is made up of college students who are majoring in advanced mathematics, you’ll likely get a more accurate estimate of the answer.

The general public most times has an affinity towards their favorite teams. When they want to bet they will ask themselves “who is my favorite team?” which tends to reduce the efficiency of the predictions you get using the wisdom of the crowd.

To get the best of using this technique, you need to also know that speculators are motivated by profit but the ways in which this can be achieved are divergent.

In the financial world Pump & Dump commonly refers to the practice of hyping shares to inflate their price and enable short-term gains, while the inverse is also common with the shortening of shares that are driven down by negative speculation.

These tactics drive the market in an unnatural direction, and equally apply within betting.

The speed with which information now disseminates (via social media) can make this even more pertinent and is not a circumstance where the crowd can be trusted.

If you have any comments or opinions about this, please send them in the comment section below.

What you should know about 12&gg soccer predictions