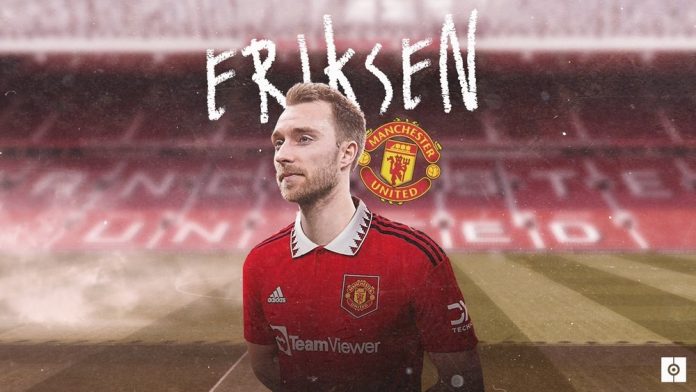 Manchester United has confirmed the jersey number of their new signing Christian Eriksen ahead of next season. The former Tottenham midfielder joined the Red Devils on a free transfer after his one year contract ended with Brentford.

Eriksen will don the number 14 jersey for Manchester United next season which is the previous jersey number of Jesse Lingard who was released this summer and joined Nottingham Forest.

Manchester United took to their website to release an official statement to confirm Christian Eriksen’s number at the club.

“Christian Eriksen’s Manchester United squad number can now be revealed. The Danish international was officially unveiled as a Red earlier this week, after joining as a free agent on a three-year deal,” the club confirmed.

“Eriksen will hope to be involved in this weekend’s friendlies against Atletico Madrid and Rayo Vallecano.Ahead of those matches, where we hope the 30-year-old can be seen in action for United for the first time, we can confirm that Eriksen will wear the no.14 shirt during the 2022/23 season.

“It will be the first time Christian has sported that particular number during his club career – he was no.8 for the majority of his time at Ajax and wore no.23 at Tottenham Hotspur. Eriksen was given the no.24 for his two-year stint with Internazionale and took the no.21 during his half-season spell at Brentford earlier this year.

“Our new midfielder succeeds Jesse Lingard in the no.14 shirt – the Academy product vacated the number this summer, meaning it was free for the first time since 2016.

“Aside from Jesse, another notable no.14 wearer was Javier Hernandez, with the Mexican international netting 59 times in 157 games for United. Zoran Tosic briefly wore no.14 in 2008/09, while Alan Smith, Tim Howard, David May and the late Andy Goram have also sported it during games this century.”