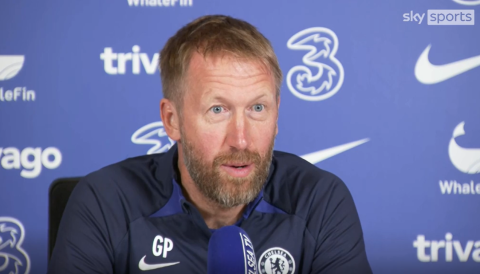 Chelsea failed to secure all three points in their game against bitter rivals Manchester United. The Blues played a 1-1 draw against the Red Devils at the Stamford Bridge on Saturday evening.

After the game, Chelsea manager Graham Potter reacted to their draw against the Red Devils.

Chelsea manager Graham Potter, speaking to Sky Sports, says: “It’s disappointing because we’re 1-0 ahead at the end but over the course of the game a point is about right and I’m not sure if we did enough to win it. A really fighting performance from us, we improved a lot after 30 minutes so we will take what we get. We couldn’t get enough control of the game in the middle. The boys gave everything they can and improved a lot in terms of our work, but we were playing a good side.

“I thought the players’ attitude on the pitch was great, the boys gave everything in a hard, intense match in the middle of a really busy period. The boys left everything out there. Kepa was a bit unlucky but it’s only just gone in and the first goal we have conceded in a while but we have to take the positives. I thought we could’ve attacked a bit better at times. We had chances, they had chances so a point is about right.”