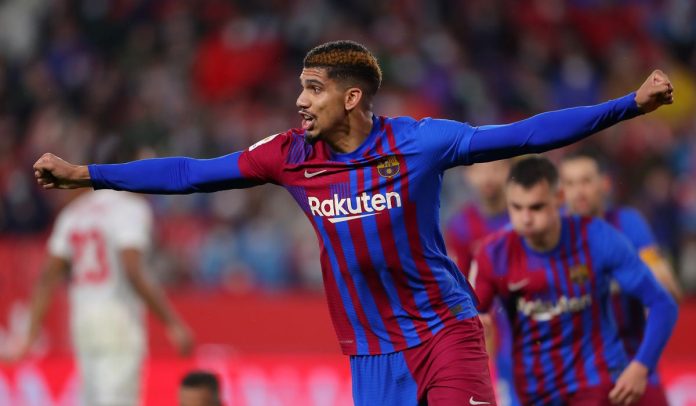 Real Madrid is interested in signing Barcelona star Ronald Araujo on a free transfer, according to reports from Catalan radio station KNB.

Los Blancos and the Catalans are not on good terms when it comes to selling and buying players from each other the last time that happened was in 2007 when Argentine striker Javier Saviola joined Real Madrid from Barcelona.

Araujo has been one of the best players for Barcelona this season so far, and reports have it that his current contract with the Catalans will come to end in 2023.

Recent reports also confirmed that the 22-year-old talks on a new deal at Camp Nou have stalled, and Real Madrid are looking for an opportunity to pounce on the situation.

Barcelona is likely to allow one of their best assets to join their bitter rivals and will do more to convince the young centre back to sign a new contract with the club.

Araujo was in action for 120 minutes against Real Madrid in the Spanish Super Cup despite being injured and he gave a good impression with his performance in Barcelona’s defence.

Facebook
Twitter
Pinterest
WhatsApp
Telegram
Previous articleWho are the Top Contenders of Major League Soccer in 2022?
Next articleBarca Star Hits Back At The Club After Being Told To Leave

Arsenal defender Dinos Mavropanos has joined German Bundesliga side  Vfb Stuttgart on a permanent transfer after being loaned to the club for the past...
Read more
Transfer News

Chelsea star Antonio Rudiger has finally announce his departure from the club after Thomas Tuchel has initially confirmed he will leave in the summer. The...
Read more