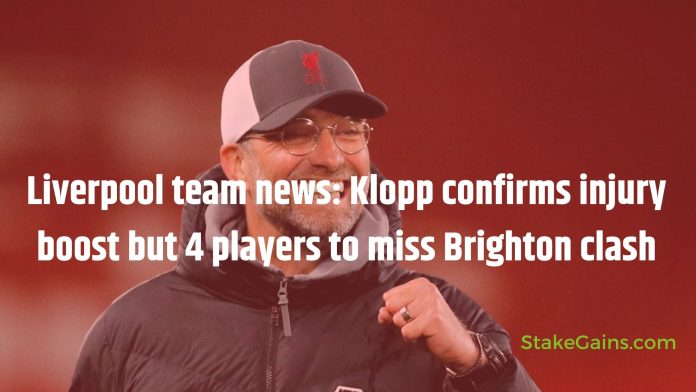 Jurgen Klopp has confirmed an injury boost but he’ll be without at least four players for Liverpool’s clash with Brighton at Anfield on Saturday afternoon.

Jurgen Klopp has confirmed an injury boost but he’ll be without at least four players for Liverpool’s clash with Brighton & Hove Albion at Anfield on Saturday afternoon.

The Reds boss held his pre-match press conference this afternoon and he revealed that Naby Keita is expected to be fit and available for selection this weekend despite being forced off during the 5-0 win at Manchester United.

Keita limped off at Old Trafford last weekend after being on the wrong end of a horror tackle from Paul Pogba but luckily he’s escaped serious injury and the midfielder has been in full training with the rest of the Liverpool squad this week.

Thiago Alcantara is also back on the grass at Melwood having resumed full training on Thursday. The Spaniard has recovered from a calf injury that’s kept him out in recent weeks but Klopp expects the Brighton game to come too soon for the former Bayern Munich star.

Liverpool is also set to be without Fabinho once again as the Brazilian is still working his way back from a knee injury and is yet to be given the green light to take part in training.

“Naby Keita looks good; we were all surprised, but he was obviously lucky so I think he will be ready.

“With Fabinho it doesn’t look that good, it’s a bit more complicated. Not too complicated, but complicated enough to keep him out now again, probably. I still wait for last news, but he was not in team training yet and that is never a good sign.

“Thiago was in team training for the first time yesterday. We did a session where he could be part of pretty much the whole session, [but] that doesn’t mean he is ready to play a football game, unfortunately.

Liverpool will continue to be without the services of James Milner as he’s been ruled out until after the November international break with a hamstring injury while Harvey Elliott is out with a long-term ankle injury.

Goalkeeper Caoimhin Kelleher is facing a late fitness test due to illness so it means Klopp will be without at least four players when they welcome Brighton to Anfield tomorrow afternoon.