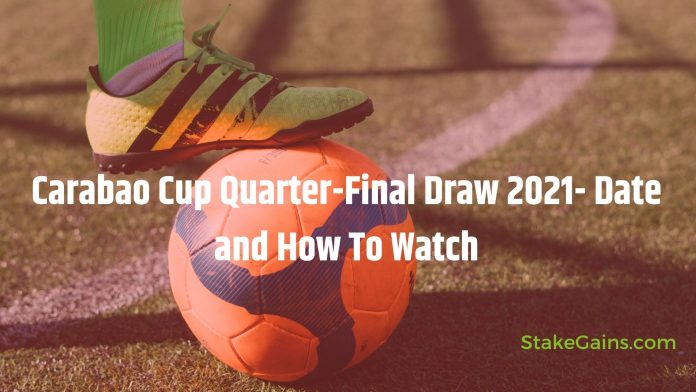 The world is looking forward to the Carabao Cup quarter-final draw with Liverpool, Arsenal, and Chelsea all involved.

What match are you looking forward to? Leave it in the comment section.

The 2021-22 Carabao Cup is underway with the Premier League clubs having entered the competition.

The tournament is now heading towards the quarter-final stage, with excitement now ramping up about who could be crowned winner of the League Cup.

Do you want to watch it? Just read on and get full details.

StakeGains has everything you need to know about when the quarter-final draw for the Carabao Cup is, how to watch it, and what teams are involved.

When Is The Carabao Cup Quarter-Final Draw?

The Carabao Cup quarter-final draw will take place during Soccer AM on Saturday, October 30, with hosts Jimmy Bullard and John Fendley conducting the draw.

No exact time has been set for draw proceedings, but it will happen during the show’s broadcast between 10:30 am – 12 pm BST.

The Carabao Cup quarter-final draw will be broadcast live on Sky Sports Main Event and Sky Sports Premier League. If you use DSTV or GOTV, you can go ahead and check any of the super sports channels.

It will also be available to watch, free of charge on the Sky Sports YouTube channel.

Which Teams Are In The Carabao Cup Quarter-Final Draw?

All but one of the teams in the quarter-final are from the Premier League, with Sunderland carrying the flag for League One.

Brentford progressed after knocking out Championship side Stoke City, while Chelsea and Arsenal advanced with wins over Southampton and Leeds United respectively.

Send us your predicted team matchup in the comment section. Let’s go