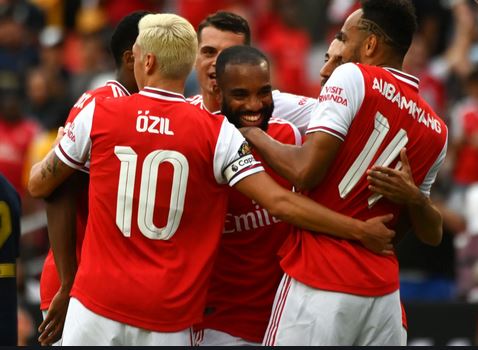 Arsenal will be without four key players when they host Dundalk in tonight’s Europa League clash at the Emirates Stadium due to injury.

Arsenal disclosed this in a statement via its official website.

Mikel Arteta’s men head to the game following a 1-0 defeat against Leicester City in the Premier League last weekend.

“Rob Holding – Sustained hamstring strain during the warm-up at Manchester City on October 17. Rob has progressed well and is aiming to be back in full training within the next week,” the statement read in part.

“David Luiz – Sustained slight thigh issue during Sunday’s match. Will miss Thursday’s match and is being assessed ahead of our match at Manchester United.
“Pablo Mari – Sustained significant sprain to ankle ligaments during Manchester City (a) on June 17. Aiming to integrate into full training after the November international period.

“Gabriel Martinelli – Sustained injury during training on June 21. Aiming to return to full training by the end of the calendar year.”

The match kick-off time is 9 pm.