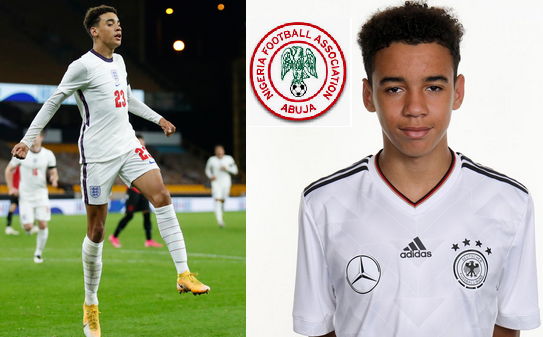 Bayern Munich star, Jamal Musiala has snubbed Nigeria for Germany after confirming in a recent interview that he has decided to represent the European side on international level.

Jamal Musiala was born in Germany to a British-Nigerian father (which makes him eligible to player Nigeria and England) and a German mother.

He moved back to England at the age of 7 and played for Chelsea academy before joining the Bavarians in 2019.

He Previously represented England in the under-21 but he has now switched allegiance to his country of birth.

In an interview with The Athletic, he confirmed his decision of representing Germany after so many speculations concerning the country he will represent on the international stage.

“What is best for my future? Where do I have more chances to play?,” he said.

“In the end, I just listened to the feeling that over a long period of time kept telling me that it was the right decision to play for Germany, the land I was born in. Still, it wasn’t an easy decision for me.”