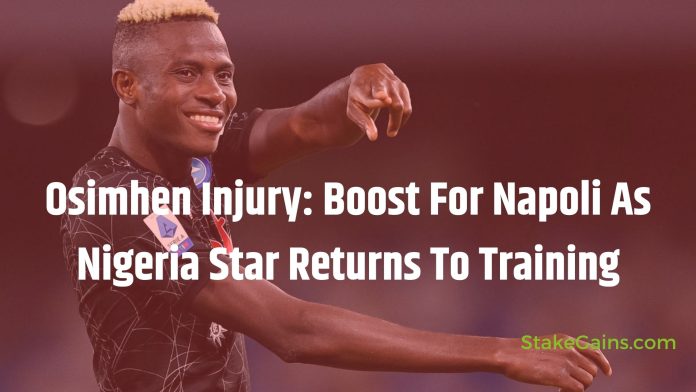 Napoli has confirmed the return to training of striker Victor Osimhen ahead of their Serie A fixture against Verona on Sunday.

The 22-year-old Nigeria international last featured for the Parthenopeans in the 3-0 win against Bologna on October 28 but he later suffered a muscle strain in training that saw him miss two matches – the 1-0 Serie A win against Salernitana and the 4-1 win against Legia Warsaw in the Europa League.

Ahead of their home game against Verona at Diego Armando Maradona Stadium, Napoli has confirmed in a statement that the Super Eagle managed the entire training session without a problem and will be in line to play this weekend.

“After the success in Poland, Napoli resumed training this morning at the SSC Napoli Konami Training Centre,” read part of the statement on their official website.

“The Azzurri prepare the match against Verona scheduled at the Maradona Stadium on Sunday at 6 pm for the 12th matchday of Serie A.

“The other men in the squad were engaged in an initial phase of dry activation and subsequently on an agility circuit.

“Following the tactical session, small games and closing with exercises on inactive balls.

“Victor [Osimhen], Fabian, and Insigne did the entire training as a group. Custom Manolas in the field. Malcuit did custom in the gym.”

Osimhen, who joined Napoli for a club-record fee of €80 million from Lille, has been the key player for the side managing five Serie A goals from nine appearances so far in this campaign.

In a recent interview, former Catania Sporting Director Pietro Lo Monaco revealed why he thinks Osimhen will play a vital role in inspiring Napoli to glory this season.

“This round could mean an attempt to escape from the two leading teams,” Lo Monaco said.

“The calendar favors Napoli because they have some commitments within their reach and places AC Milan in more difficulty as they have to play against two opponents at least of the same level.

“We must always go there with strong feet, however, it is not the calendar that must convey a certain optimism but the performance of the team, the compactness, strength.

“At this moment Napoli expresses all this. There are players in great shape: Osimhen had not arrived [last season], now he is in a very remarkable position.”

The return of Osimhen will also be a huge boost to Nigeria’s 2022 Fifa World Cup qualifying campaign as they have two matches coming up against Liberia and Cape Verde.