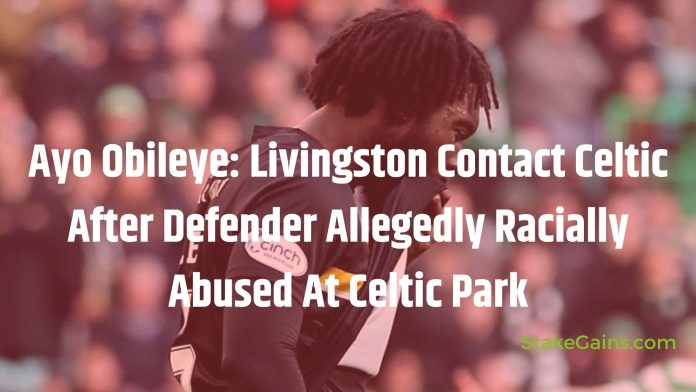 A Celtic fan is alleged to have shouted racist abuse at Livingston defender Ayo Obileye during Saturday’s Premiership match at Parkhead, which ended in a goalless draw.

Livingston has contacted Celtic after defender Ayo Obileye was allegedly subjected to racist abuse in their Premiership match on Saturday.

An Associated Press journalist has claimed that a Celtic fan shouted racist abuse at Obileye during Saturday’s league match at Celtic Park, which ended in a 0-0 draw.

The abuse is alleged to have occurred when Obileye ran back onto the pitch following an injury check in the second half.

Obileye was later sent off for striking out at Celtic forward Kyogo Furuhashi in an off-the-ball incident in the box.
Livingston assistant manager Marvin Bartley, who himself has been subjected to racist abuse online this season, reacted to the allegations on Saturday night in a tweet, which read:

“It’s important that a football club isn’t tarred because of one racist individual within the stadium today!

“When we took the knee at the start of the game we were applauded from all corners and that’s the memory I will take away from the game.
“Now it’s time to find the culprit.”

Celtic and Livingston are investigating the incident.

What do you guys think about these individuals who racially abuse others? Let’s hear it in the comment section.

What do you think is the effect of racism in sports and what can be done to combat the act?