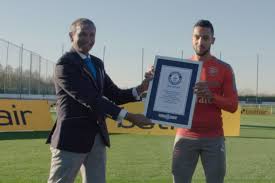 The Arsenal attacker got his name in the Guinness Book of Records after beating the previous best altitude by two metres. Arsenal's Theo Walcott has set a world record for controlling a ball dropped from a high altitude. The England international took part in a challenge during training, competing against team-mates Laurent Koscielny, Francis Coquelin and Nacho Monreal.
The quartet were challenged to stop a ball being dropped from a crane, with Walcott showing his skills by controlling it superbly after it was dropped from 34 metres. Walcott beat the previous record by two metres in front of a certified Guinness judge, ensuring his place in the Guinness Book of Records. Walcott takes the record from English football freestyler who John Farnworth set the record at 32 metres, after Lionel Messi had initially recorded a height of 18 metres in a promotion for a Japanese television show.
However, Farnworth can take solace in the fact that his name is still in the record books, having completed 83 around the world keepie-uppies in a minute.