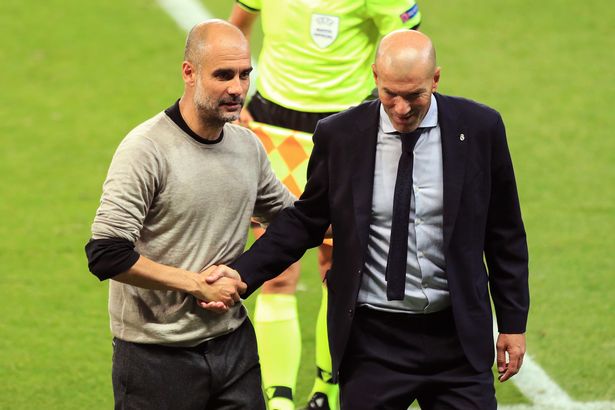 Manchester City boss, Pep Guardiola, has finally revealed what he told Real Madrid coach, Zinedine Zidane after his team dumped the La Liga champions out of UEFA Champions League last week.
Guardiola’s men eliminated Real Madrid from the Champions League last-16 second-leg tie on 4-2 aggregates.
Guardiola and Zidane had a long chat after the encounter at the Etihad Stadium.
However, speaking ahead of his side’s Champions League last-8 final tie against Lyon on Saturday, Guardiola was asked about his discussion with his “idol” Zidane, and the Spaniard was quoted by IBTimes as saying: “I congratulated him for LaLiga. I always said that winning the league is the most difficult title because it shows 11 months being there.
“We spoke about our families, and I wished him all the best. He was one of my idols when I was a player. I played against him in the national team with France, and I suffered a lot.
“He was one of the greatest, and as a human being, he is an example, and I like how he can represent our profession as he does.”