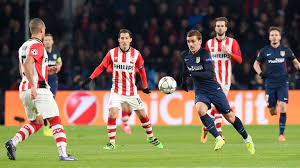 Diego Simeone says it would not be "humble" to state whether Atletico Madrid can win the Champions League this season. Atletico suffered a defeat on penalties to city rivals Real Madrid in the final at San Siro in May - a result that Simeone later admitted "felt like a death". The loss came just two years after they were beaten 4-1 by Madrid in the final in Lisbon, a match they came within seconds of winning before Sergio Ramos headed in to make it 1-1 in second-half stoppage time. A strong transfer window, in which they kept star players including Antoine Griezmann and brought in Nico Gaitan and Kevin Gameiro, has seen Atletico tipped as possible winners once again this term.
Simeone, however, does not want to look beyond Tuesday's Group D opener against a PSV side they beat on penalties in last season's round-of-16. "Are we capable of winning the Champions League? We're capable of winning tomorrow. Thinking about anything more would not be humble," said the coach. "Everyone needs to win to improve confidence. In Vigo, in the second half [of the 4-0 win against Celta], the team freed themselves.  "It's a beautiful pitch, a fantastic atmosphere - a good place to start. The goals were important six months ago, but tomorrow it's the points. "The two teams are better than they were 15 days ago. PSV are a great team, especially on the break. They played in two different ways last year. "Nobody can say that, if we win tomorrow, we go through. We lost the first game two seasons ago and then we were top of the group." Midfielder Koke admits that expectations have increased among the fans but does not believe that a defeat in Eindhoven on Tuesday would be too damaging to their ambitions. "It's always important to start by winning and tomorrow is an important game that we have to win. But it's not the end of the world if we don't - there are still five more games," said the Spain international.
"We have to make the most of our chances. Last year, we had a lot of chances in the first half but we were not successful. That's what is important - being solid at the back and getting forward. "We never relax, we're always eager to win. We've created a lot of expectation with all the new guys."