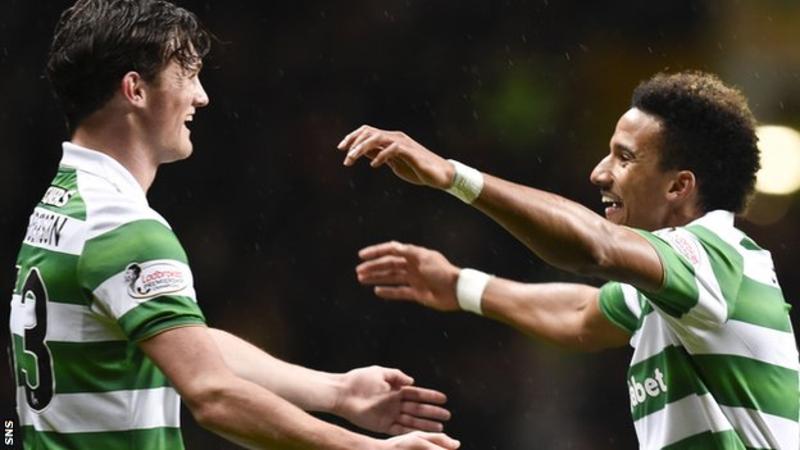 Celtic moved 14 points clear at the top of the Scottish Premiership, with Scott Sinclair's first-half strike enough to secure a 12th straight league win. Ryan Edwards and Ade Azeez threatened early for a positive Partick side. But a Celtic team showing eight changes edged in front after 16 minutes when Sinclair's clipped finish exposed a static defence after a free-kick. Thistle were doughty opponents but have now gone seven league games without a win and remain bottom of the table. An 18th consecutive win in Glasgow derbies against Thistle took Brendan Rodgers' side further clear of city rivals Rangers at the top of the Premiership - and they have another game in hand to come.
Thistle, who had the chance to jump to eighth place, were unable to use their extra game over their rivals at the other end of the table. The defending champions did not produce their best form against dogged opponents, but they found a way to win the game. That in itself is a useful attribute and Rodgers will have been cheered by Sinclair's goalscoring effort. Other players given a starting spot were not as persuasive, with Mikael Lustig and Jozo Simunovic not looking entirely solid at centre-back, the latter being robbed by Edwards early on only for the Australian to finish weakly.
Despite being out of sorts at times, Celtic still had opportunities to secure a more convincing win in the second half, but they found Tomas Cerny a difficult obstacle to beat in the Thistle goal. Moussa Dembele saw an early effort after the break deflected wide, then the Thistle goalkeeper saved well from Patrick Roberts, Sinclair and again from Dembele, whose strong run and powerful finish looked destined to find the corner of the net. Substitute Stuart Armstrong also had an attempt on goal saved as Celtic sought the second goal that would have eased any nerves inside the stadium.
The attention was drawn to 18-year-old Calvin Miller making his competitive debut at left-back, and fellow youth development products Callum McGregor and Liam Henderson also both started the match. The former can be quick-witted on the ball and industrious, while the latter's rangy running and set-piece delivery are threatening. It was Henderson's clever free-kick - which caught the Thistle defence unaware - that created the decisive goal for Sinclair, who met the cut-back with a clip over Cerny. Miller's first involvement was to win a tackle and he mostly looked composed on the ball and eager to surge upfield.
He might have scored, too, when a series of one-twos around the edge of the area ended with him cutting into the box, but his effort was smothered by Cerny. It wasn't a wholly comfortable night for him though, since his direct opponent, David Amoo, was quick and strong enough to occasionally brush the youngster aside. When that happened again in the second half, Rodgers immediately turned to the experienced Emilio Izaguirre and Miller was soon replaced after a steep learning curve for the teenager.
The visitors refused to merely sit deep and look to close down Celtic's passing angles. They pressed and harried much closer to the Celtic goal and the home side never found their usual fluency and rhythm. With Amoo capable of troubling Miller, and Azeez aggressive enough to discomfort the two Celtic centre-backs, there was promise for the visitors to build on. The best of their play, though, came through the creative figure of Edwards.
The Australian was quick and nimble enough to make a mark on the game despite opposing Celtic captain Scott Brown. One burst past Brown led to Edwards feeding Azeez and the striker's awkward finish was brushed wide by Celtic goalkeeper Craig Gordon. The visitors' lack of composure in the final third was a feature - Azeez had another low drive pushed wide by Gordon, while Ziggy Gordon's finish lacked conviction after the full-back galloped into the penalty area - but they kept Celtic on their heels at times. When Chris Erskine mis-hit the ball from a cross, it bounced to Sean Welsh, but he shot tamely straight at Gordon.