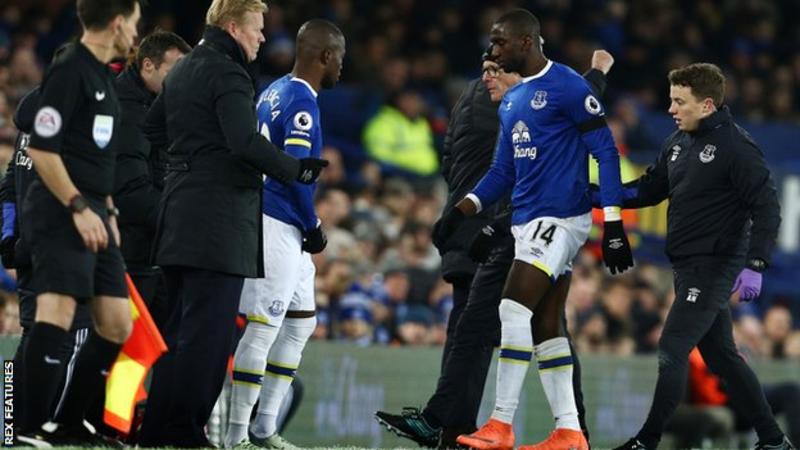 Everton boss Ronald Koeman says the loss of Yannick Bolasie has increased the need to make signings in January. The DR Congo winger, 27, will have knee surgery next week after scans confirmed he suffered serious ligament damage against Manchester United on Sunday. "The necessity now is a little bit more than before because we have lost Yannick for a long time," said Koeman. Koeman has previously spoken about his interest in taking Manchester United's Memphis Depay, 22, on loan in January. Bolasie injured the right anterior cruciate ligament in the 68th minute of Sunday's 1-1 draw at Goodison Park and is unlikely to feature again this season.
Koeman said the priority now was for the club to ensure the £25m summer signing from Crystal Palace gets the best possible treatment. "He is going to London for an opinion about his knee, what is the best thing to do and the kind of operation, and then maybe he will go somewhere else to get a second opinion," he said. "Normally I think the operation will be next week but it is a big disappointment for everyone." Koeman 'expects more' from Barkley. Ross Barkley has featured 12 times in the league this season, scoring twice
Meanwhile, Koeman has challenged midfielder Ross Barkley to prove he is worth a place in the team. The England international, 23, was dropped for Sunday's 1-1 draw at home to United and appeared to be visibly upset when he did not feature. "If you like to play you need to show that to the manager during the whole week and he is trying to do his best," said Koeman, who also dropped Barkley for a league game against Manchester City in October. "Sometimes it can be a tactical reason, sometimes I expect more from Ross Barkley. "He needs to accept it. He needs to show it on the training pitch and that is the best way to give the best answer as to why he doesn't play. "He is always trying to do his best but it is not always about the mentality of the player, it is about tactics, his movement, his productivity."