Referees to use pitch-side monitors at Fifa's Club World Cup 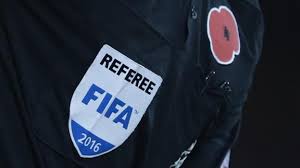 Referees will be able to use a pitch-side monitor for the first time to review decisions when the Club World Cup begins in Japan on Thursday. Video assistant referees will review "match-changing" situations before informing the on-field official. The referee will then be able to view footage for some decisions - something not permitted in previous trials. Fifa's chief of technical development Marco van Basten said the move "represents a big step forward". Fifa boss wants 16 groups of three at World Cup finals. Video assistant referees have been able to assist officials during two international friendlies this year but the Club World Cup represents their first use in Fifa competition.
Previous usage has been in what Fifa call a "semi-live" scenario, where the referee was not able to review decisions on a pitchside monitor. Under the live system, on-field referees will still make the final decision in the process but it is hoped video assistant referees will be able to correct clear mistakes in serious incidents. "Ultimately, these tests should prove invaluable in terms of determining whether the processes are sound or whether any further refinements are needed," added Van Basten, a former Netherlands international striker. "At the same time it's important to remember that we are entering somewhat unchartered territory here, given that we are going live for the first time." Fifa intend conducting further live trials in several countries next year.
The Club World Cup, which features champion club sides from each of Fifa's six continental confederations, plus the domestic champions from the host nation, begins in Yokohama with Kashima Antlers taking on Auckland City. Europe's representatives Real Madrid play their first fixture on 15 December. Barcelona won the 2015 tournament, beating Argentina's River Plate 3-0 in the final.