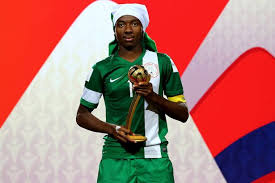 The 18-year-old attacking midfielder has been on the Gunners' raider since January and the deal has now been formalized
Arsenal have confirmed the signing of Nigeria youngster Kelechi Nwakali from the Diamond Football Academy in Nigeria on a five-year deal.
The 18-year-old attacking midfielder has been linked with the club since January but was not formalized until Friday evening.
Nwakali was named the Fifa U17 World Cup player of the tournament in Chile in 2015 after a resounding performance with Nigeria and had caught the attention of the North London club.
Reports also suggested that the deal could not be finalized earlier due to the international rules on age but the Gunners having sealed the deal confirmed that the youngster would go out on loan for the season.
“Kelechi, who joins us as a young professional, will look to gain experience with a loan move in the coming months,” said a statement on the club’s website.
The deal was initially meant to include his countryman Samuel Chukwueze but nothing seems to have been agreed on him
With this, the youngster is confirmed as Arsene Wenger’s fourth signing of the summer following the transfer of Granit Xhaka, Asano Takuma and Rob Holding from Bolton Wanderers.
Nwakali is captain of the Nigeria U20 side that recently failed to qualify for the 2017 Caf U20 Africa Cup of Nations against Sudan.