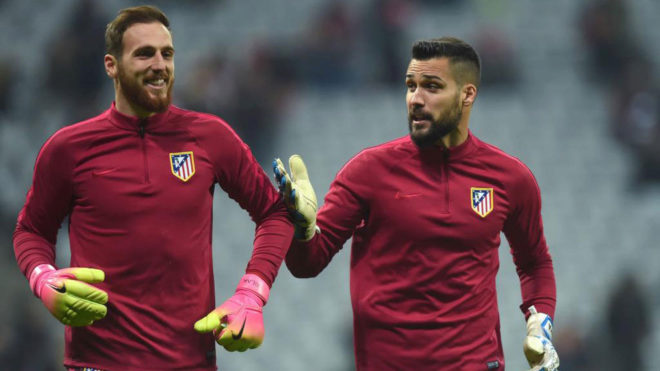 Following three games without a win in all competitions and a long-term injury to goalkeeper Jan Oblak, Atletico Madrid will be thankful that they have Miguel Angel Moya waiting in the wings to cover for the Slovenian.
The 32-year-old played most of the fixtures in the 2014/15 campaign, his first at Atletico, before being displaced by Oblak, and the former Getafe shot-stopper has an impressive record for Los Rojiblancos after conceding an impressive 31 goals in just 44 games.
"The team is not used to having moments like these where we go three games without scoring a goal, picking up 11 points from a possible 21 away from home, and having the occasional defeat," began Moya.
"But we're fighters, we're strong and this team will never surrender because it is in our DNA.
"We will keep fighting as we look to overcome this situation and secure the best possible finish, starting this Saturday in Las Palmas."
After three games without a goal - against Espanyol, Bayern Munich and Villarreal - and two key defeats against Real Madrid and Villarreal in the league, Diego Simeone's side are now 12 points behind their city neighbours.
The Majorca-born goalkeeper is set for an extended spell between the sticks, with Oblak expected to be out for three to four months after having shoulder surgery in London on December 14.
"I'm sad for Jan [Oblak] because besides being a good teammate, he is a good friend, and I had the opportunity to speak to him [about his injury] yesterday," Moya added.
"On the other hand, I am looking forward to this new opportunity and I hope that I can show that I can be counted on by the team in goal."
The former Mallorca, Valencia and Getafe goalkeeper also spoke about his dreams as a child in a video posted on Atletico's website.
"To me I have gotten here [to a big club] a little than I would have liked, but because it is late, that does not mean that I do not live it and enjoy it," Moya claimed.
"Since I have arrived here three years ago [at Atletico], I have enjoyed every day and I hope to remain here for many years more.
"Moving to the [Vicente] Calderon is not like going to any stadium, and despite not being a regular, I feel much loved and I appreciate it very much.
"It [playing at the Calderon] gives me Goosebumps and that for a player is very nice."