MESSI SET TO RETURN FOR DEPORTIVO AND MAN CITY CLASHES 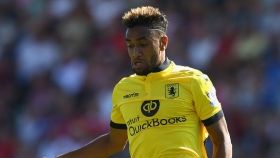 Lionel Messi is stepping up his recovery from an adductor injury and is set to feature in some capacity in Barcelona's La Liga game against Deportivo La Coruna after the international break.  The Argentine attacker was injured in the 1-1 draw at home to Atletico Madrid on September 21 and has played no part in his side's last three matches: a 5-0 win at Sporting Gijon, a 2-1 victory away to Borussia Monchengladbach and a 4-3 loss at Celta Vigo last Sunday. The Catalan club originally annunced that the 29-year-old would be out for around three weeks and in that respect, the break for World Cup qualifiers has come at a good time for the Blaugrana. While his Argentina team-mates toiled in a 2-2 draw against Peru in Lima on Thursday night, Messi continued his recovery with gym work in Barcelona and posted a picture on his Instagram account on Friday, with the description reading: “Just another day.”
The five-time Ballon d'Or winner was suffering with pain in his left adductor prior to the previous international break and made the problem worse by turning out for Argentina in his comeback game against Uruguay last month, returning ahead of time to Barcelona and missing the World Cup qualifier against Venezuela. That restricted his movement and in attempting to compensate by placing more weight on his right side, he picked up the new problem - a strain in the adductor of his right thigh - against Atletico. Barcelona are wary about bringing back the forward too soon, but his progress has been good and all being well, he will feature as a substitute in the Primera Division clash at home to Deportivo on October 15.
"Messi plays it all because he is the best in the world," Barca boss Luis Enrique said after the 7-0 win over Celtic in early September. But the Asturian may have to give his star man more rest to avoid a recurrence of the groin problems in the weeks to come. "Without Messi, we all lose," Luis Enrique later said. “Football loses. We have to find solutions, knowing that with Messi we’re very strong. We know that we have to win.” The plan now is for Messi to return for the crunch clash against Manchester City in the Champions League on October 19, but before that, Barca fans can expect a cameo on Saturday versus Depor.