MEET THE AMERICAN FANS WHO VOWED TO WRITE ARSENAL INTO THEIR WEDDING VOWS! 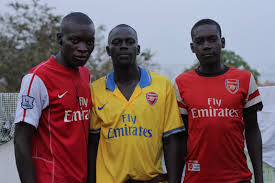 Do you promise to always love me... and to always support Arsenal Football Club?" Passion for football - and for Arsenal in particular - is far from limited to north London. New York is teeming with die-hard supporters who wake up early to watch their beloved Gunners - and who can't turn away from a game even at a wedding. To celebrate the official launch of the new home shirt, PUMA have gone out to speak to Arsenal fanatics around the world to find out what the club means to them. Four iconic cities feature in a 'We Are THE Arsenal' campaign that celebrates Gunners fans from across the globe, with New York the latest stop. The campaign has already taken in Mumbai and Shanghai, where one fan had his neighbour banging on the wall in protest at his exuberant support. And in New York, we can see fans so devoted that they wrote their love for Arsene Wenger's side into their wedding vows. Thierry Henry, Robert Pires and Freddie Ljungberg joined Hector Bellerin & Santi Cazorla to introduce the series which is highlighting just how much the club means to its global support. "These films are a nice way to recognise the importance of the supporters, and to show their knowledge and passion is the same in every continent,” said Cazorla. Stay tuned to Goal for the final Arsenal local film in the next week as PUMA's 'We Are THE Arsenal' campaign goes global