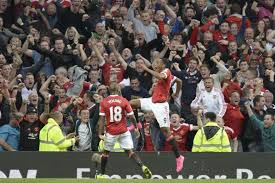 The Welshmen scored with just eight minutes to play to pile further misery on Jose Mourinho's side. Joe Allen struck late to rescue an unlikely point for Stoke City at Old Trafford and deny Manchester United a much needed victory. The former Liverpool midfielder equalised on 82 minutes with a poacher's effort after Jon Walters' shot had struck the bar.
Anthony Martial had previously given Jose Mourinho's side the lead on 69 minutes with an excellent individual effort. Man united thought they had it in the game but they were surprised few minutes to the end of the game.