MAN CITY VS GLADBACH CALLED OFF DUE TO HEAVY RAIN 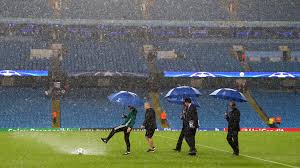 Heavy rain in England has forced the scheduled encounter to be postponed until a later date. The Champions League match between Manchester City and Borussia Monchengladbach has been called off due to safety and security concerns at the Etihad Stadium. Despite the UK being in the midst of a September heatwave, forebodingly dark skies opened into a torrential downpour after 6pm BST in Manchester. Standing water on the playing surface prompted a pitch inspection led by referee Bjorn Kuipers, with the sight of the Dutch official struggling to make a ball travel more than a few yards being enjoyed by the travelling Gladbach supporters, but it made the prospect of competitive football appear incredibly unlikely.
So it proved, as 20 minutes before the scheduled 7.45pm kick-off, Manchester City confirmed the postponement in a tweet, citing "adverse weather conditions". However, it was flooding in the surrounding area which ultimately prompted the postponement, with a meeting taking place to determine when the game can be rescheduled.