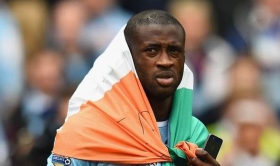 Leicester City have appealed against the red card shown to striker Jamie Vardy in Saturday's 2-2 Premier League draw at Stoke. Vardy was dismissed in the 28th minute for a two-footed tackle on Mame Diouf. If the decision is upheld, the 29-year-old England international will receive a three-match ban and miss games against Everton, West Ham and Middlesbrough. The champions said they expect to hear the outcome "in the coming days".
Vardy jumped and made the tackle with both feet on the Potters' Senegal forward Diouf. He won the ball but made contact with Diouf's shins. Referee Craig Pawson deemed it reckless enough to issue a red card, Vardy's second of 2016. "He wants to challenge and get the ball, not make a foul," Foxes manager Claudio Ranieri said after the match, in which his side came from 2-0 down to earn a point. "There was a big challenge between Johnson and Vardy. He touched the ball. Maybe it was yellow."