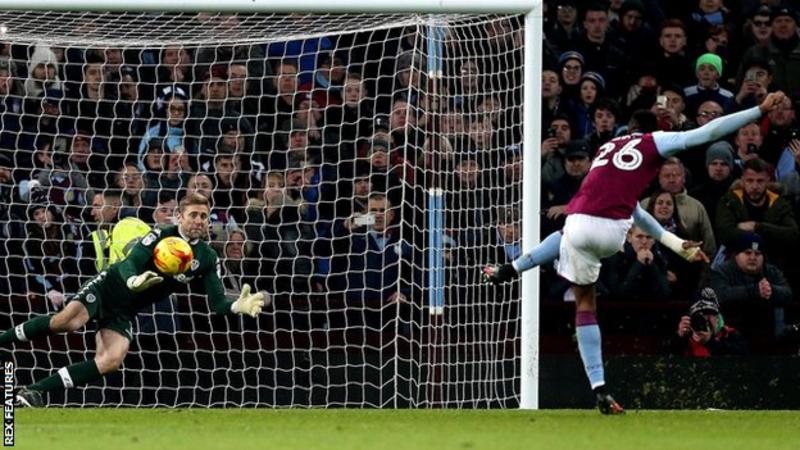 Pontus Jansson headed the visitors ahead from a corner after the break and the defender then hit the crossbar. After Liam Cooper handled under pressure in the box with four minutes left, Kodjia equalised from the spot. There was still time for Leeds winger Hadi Sacko to hit the bar and Rob Green to deny Kodjia a winner. Leeds missed the chance to move up to third but climb a place to fourth, while Steve Bruce's Villa are now five points off the play-off places.
Villa were the better side in the first half, with Kodjia and Jordan Ayew forcing saves from Green, but the game came to life when Garry Monk's side took the lead. On-loan centre-back Jansson was left unmarked and powered a header at Mark Bunn, but the Villa keeper was unable to stop it crossing the line. Leeds, who had won eight out of 10 heading into the match, looked likely to emerge victorious until the hosts were awarded a penalty for Cooper's handball after referee Roger East had consulted with assistant Andrew Garratt. There were chances at both ends in a frantic finale, with Jansson having an effort from close range blocked and Kodjia shooting wide moments after being foiled by Green.
Aston Villa boss Steve Bruce said "It's the best Leeds team I've seen in a good few years. "They're confident, playing well and you can see that in abundance. But we stuck at it and got a point out of the game. "We might have nicked it and I think that might have been a bit unfair. "We're still unbeaten at home but we've got a lot of work to do, I'm under no illusions about that. We're still a long way away from where we need to be." Leeds United boss Garry Monk: "We got the goal and had two or three really good chances that you have to take. "Had we taken one of them I think we would have won the game quite comfortably. "But a good team like Aston Villa, who are very experienced, stuck in there and had their chances as the game went to and fro towards the end. "It shows how far we've come that we're disappointed not to win here against a team that have a fantastic record at home."