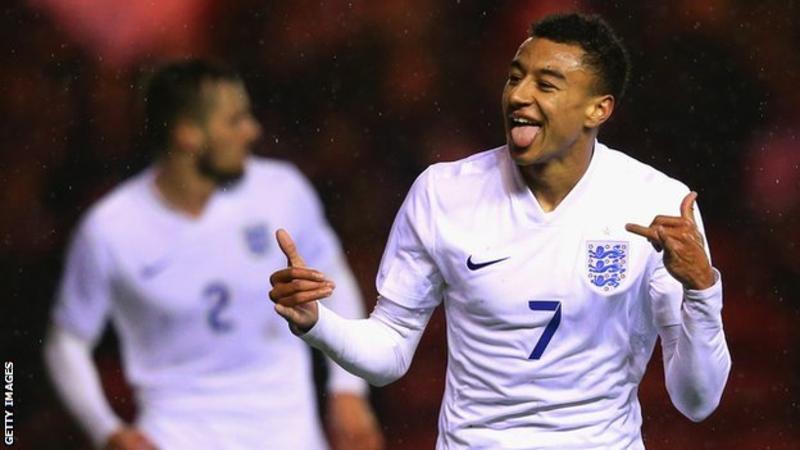 Manchester United winger Jesse Lingard has been called up by interim England manager Gareth Southgate for World Cup qualifiers against Malta and Slovenia. The 23-year-old winger, part of Southgate's Under-21 squad at the 2015 European Championship, has scored one goal in four United games this season. Club team-mate Marcus Rashford is back in the senior squad after scoring a hat-trick against Norway Under-21s. Southgate has taken on the England role after Sam Allardyce left on Tuesday. He will take charge of the Wembley game with Malta on Saturday and the trip to Slovenia three days later.
Lingard has been named in the senior squad once before, but failed to make it onto the field in England's 2-0 friendly win over France in November. Stoke right-back Glen Johnson returns to the England set-up for the first time since the 2014 World Cup, while winger Alex Oxlade-Chamberlain is back after a year's absence. Johnson's last England appearance was in a 2-1 defeat by Uruguay, in which he provided the cross for Wayne Rooney's goal. Southgate said that Leicester midfielder Danny Drinkwater had been ruled out after picking up an injury at the weekend, as were Liverpool pair Adam Lallana and Nathaniel Clyne who were injured in the Reds' win at Swansea on Saturday. "We've tried to keep some continuity from last month because my view would be that there are a lot of things that have been going right," said Southgate.
"We've had a few people unavailable through injury like Harry Kane and Jack Butland, while Luke Shaw isn't quite back fit yet. That's had a bearing on the squad." England lie second in Group F, level on three points with leaders Scotland, after Lallana's late goal gave Allardyce victory away to Slovakia in his only match in charge. Meanwhile, there was no place for Watford striker Troy Deeney. Former England players Alan Shearer and Jermaine Jenas suggested on BBC TV's Match of the Day that the uncapped 29-year-old could force his way into the squad in the absence of fellow striker Kane. After the Malta and Slovenia games, Southgate also has the home game against Scotland on 11 November and a friendly against Spain on 15 November to press his claim for the job before the Football Association makes a decision on a permanent appointment. Allardyce's reign came to an end after only 67 days after he was filmed apparently advising undercover reporters on how to get around rules over third parties owning players.
Goalkeepers: Fraser Forster (Southampton), Joe Hart (Torino, on loan from Manchester City), Tom Heaton (Burnley)
Defenders: Ryan Bertrand (Southampton), Gary Cahill (Chelsea), Phil Jagielka (Everton), Glen Johnson (Stoke), Danny Rose (Tottenham), Chris Smalling (Manchester United), John Stones (Manchester City), Kyle Walker (Tottenham)
Midfielders: Eric Dier (Tottenham), Jordan Henderson (Liverpool), Alex Oxlade-Chamberlain (Arsenal), Michail Antonio (West Ham), Jesse Lingard (Manchester United), Raheem Sterling (Manchester City), Theo Walcott (Arsenal), Dele Alli (Tottenham)
Strikers: Wayne Rooney (Manchester United), Marcus Rashford (Manchester United), Daniel Sturridge (Liverpool), Jamie Vardy (Leicester)