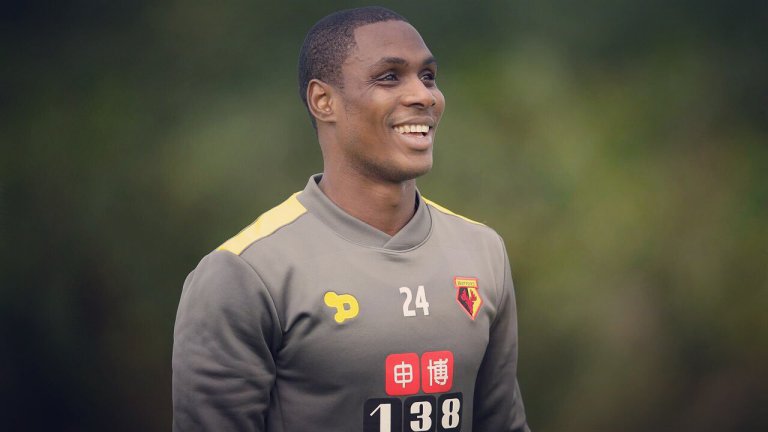 Super Eagles striker Odion Ighalo has admitted that he would welcome international teammate Mikel Obi at Watford during the January transfer window, reports Completesportsnigeria.com. Mikel is yet to make an appearance for Chelsea under Antonio Conte which has sparked reports of him leaving the London-based club before the end of the current season. Speaking as a guest on Fanzone on SuperSport on Wednesday night, Ighalo sait Mikel is a player any Premier League side will wish to have. “I will like it if Mikel join me at Watford,” Ighalo said after being asked by one of the callers to the live show if he would like his fellow Nigerian at Vicarage Road. “He is my captain at the national team. Apart from that he is a very good player, very talented.
“I have played with him and against him, he is a very good player. There is no team in the Premier League that will not want to have such a player. “I am happy I have played with him so I will be very happy to have him in my team.” Despite not having the best of seasons for Watford after an impressive debut Premier League campaign last season Ighalo, who has scored just one goal in 12 league appearances so far, insists he is happy and will continue to work hard to get back into the team. “I have a five-year contract at Watford, I am happy,” he said. “Though I am not playing regularly for now, as a striker I want to be playing but things are not going the way I want. But I am working hard, the fans love me and I want to keep going and see how the season goes.”
Ighalo described his first EPL goal for Watford (in a 2-2 away draw against Everton) as one of the greatest feelings he ever had. He also stated that Watford’s promotion to the EPL two seasons ago was one of his greatest moments at the club. “Scoring my first Premier League goal was one of my best feelings in life,” the 28-year-old added. “I always dreamed about the Premier League when I was young back then in the streets in Nigeria. I was just hoping to play in the Premier League and wasn’t thinking about scoring goals. I played in Spain and Italy and I always said to myself that I wanted to play in the Premier League.
“In my first game in the league away to Everton, I was sitting on the bench praying to just go in there and earn my first game, I never knew God had a plan for me to score my first goal. So when after scoring my first goal, I could not sleep when I got home, I was thinking about it and I was very happy; it was a great feeling for me. “One of my great moments at Watford was when I gained promotion with the team two seasons ago. That was my dream before I came to Watford, to play in the Championship and to gain promotion to the Premier League. So that was one of my great moments at Watford.” On who his best striker is, Ighalo named Argentina and Manchester City forward Sergio Aguero
“Back then I always loved to watch Manchester United’s Andy Cole and Dwight Yorke, they were great strikers. But for now the best striker in the Premier League is Sergio Aguero of Manchester City. He is a good striker that will guarantee you goals. These are strikers one can learn a lot of things from. So for now I think my best striker is Aguero.” On the current performance of the Super Eagles, who currently top their 2018 FIFA World Cup qualifying group, Igahlo said: “Super Eagles have been doing well presently. In the past we had great players but right now it’s all about rebuilding. “The last time we won the Cup of Nations, nobody gave it to us but everyone could see how the young and talented squad performed. And may the soul of the late Stephen Keshi rest in peace. He built a good team and even when nobody gave them a chance they still went on to win. So I am happy with the way the Eagles are doing now and I believe the future is bright for us with young and talented players like Kelechi Iheanacho, Alex Iwobi, Moses Simon and others.”
And on why he plans to start his own orphanage home, Ighalo explained: “I know what I went through growing up. It’s not that easy back home and that is why I always try to give back. Every month end I send money to the widows , the less priviledged, the orphans. And I am planning to open my orhanage and that will be in May in Lagos. The idea is to help and give back to the society because like I said, I am privileged to be who I am today, and it is good to try and help those in need. Not because I have much but because I know how it was back then, so that is why I am trying to give to the poor and the less privileged.”