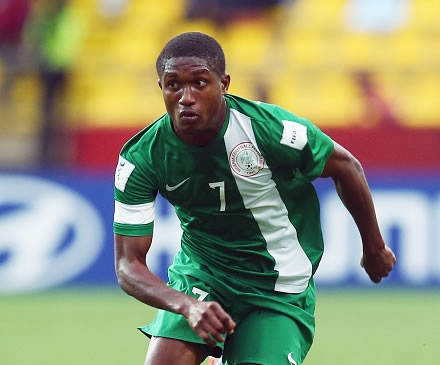 Leighton Baines scored a late penalty as Everton came from behind to draw 1-1 with Manchester United at Goodison Park on Sunday. United, for whom Marcos Rojo escaped an early red card for a two-footed challenge on Idrissa Gueye, took the lead in the 42nd minute when Maarten Stekelenburg came out of his area to try and win a ball over the top and was lobbed by Zlatan Ibrahimovic. Ander Herrera crashed a shot against the bar on the hour mark, but it still looked like United had done enough until a late push from the hosts. They equalised in the 89th mintue when former Everton midfielder Marouane Fellaini, who had just come on as a substitute, fouled Gueye in the box and Baines stepped up to convert the penalty.
The draw continues an inconsistent run of results for United, who have not won back-to-back Premier League games since August. Although Everton's own form has been worse in recent months, they should be happier with the point having largely being second best in a cagey encounter. Jose Mourinho insists his Manchester United side deserved to beat Everton. After defeat Southampton last weekend, Ronald Koeman made three changes, with Ramiro Funes Mori, Kevin Mirallas and Tom Cleverley starting ahead of Phil Jagielka, Ross Barkley and Aaron Lennon. Henrikh Mkhitaryan and Anthony Martial started for United after impressing in the EFL Cup win over West Ham in midweek. But neither side created much in a first half with only two real notable incidents.
The first came in the 16th minute as Rojo dived in two-footed on Gueye and was fortunate to only be shown a yellow card. That looked as though it would be the only talking point as both teams laboured and struggled to get into any sort of rhythm, not helped by numerous misplaced passes. But United were handed the lead in the 42nd minute as Stekelenburg came a long way out of his goal to try and win the ball before Ibrahimovic, who was being shadowed by a defender. The decision proved to be misjudged as Ibrahimovic chipped the ball over his former Ajax team-mate and it went in off the underside of the bar. There were boos from some home fans at the break, and there was little change in the second half. Mirallas did at least force De Gea into a sharp stop after getting into the box, but Herrera should have made it 2-0 when he smashed against the bar from the corner of the six-yard area.
Everton, after losing Seamus Coleman and Yannick Bolasie to injuries, eventually managed to build some momentum late in the game. De Gea kept out a swerving shot from Gueye and then tipped away a header from Mason Holgate. It looked as though the best chance had gone when substitute Enner Valencia headed at De Gea from six yards out. But United let their lead slip late on as Fellaini fouled Gueye in the box and Baines converted the penalty. Everton finished stronger in injury-time, with Baines seeing a shot saved, but they could not snatch victory.
Man of the match: Idrissa Gueye.