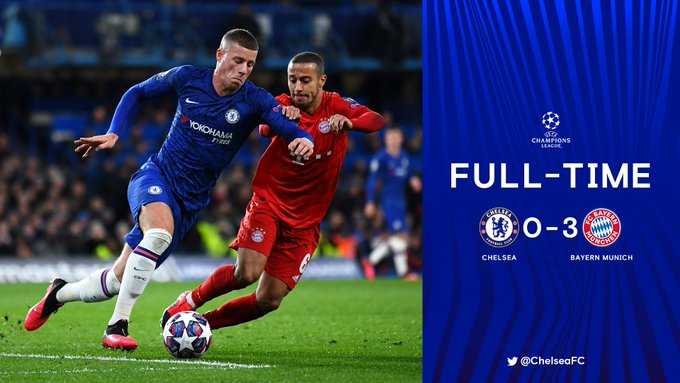 Bayern Munich stunned Chelsea in the first leg of the UEFA Champions League round of 16 tie as the German champions thrashed Frank Lampard led side 3-0 at the Stamford Bridge on Tuesday evening.
Second half brace from former Arsenal forward Serge Gnabry and a lone strike from Polish striker Robert Lewandowski put the visitors in the driving seat ahead of the second leg in Germany.
Lampard's Chelsea set two unwanted records in the game against the Bavarians which proves that the 2019-20 season is one of the bad seasons for the Blues.
The 3-0 defeat condemned Chelsea to their heaviest ever loss margin in a home game in European competition. It also marks their 8th loss at home in a single season.
Lampard and his boys will be hoping to get back to winning ways in their next Premier League fixture against Bournemouth at the Vitality stadium but face a tough test when they host Liverpool in the fifth round of FA Cup.