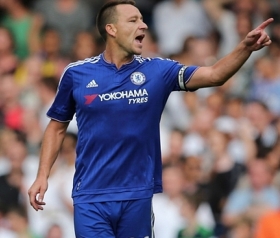 Presiding over a dismal result is bad enough, but for Pep Guardiola to stand back and watch his Manchester City players lose their heads deserves further examination. Sergio Aguero won’t play again in the Premier League until December 29 while Fernandinho is lost for three matches too. Guardiola did apologise for the Brazilian grabbing Cesc Fabregas’s throat and shoving him over an advertising hoarding; that was the least he could do. He did, however, attempt to justify that violent play. Fernandinho collared Fabregas and threw him over the side of the pitch because he was protecting his team-mate. That same team-mate had moments earlier propelled himself knee-height at an opponent thereby garnering a dismissal of his own. Aguero’s challenge on David Luiz, according to Guardiola, was “unintentional”. There’s protecting your players and there’s ignorance.
Guardiola was content to do referee Anthony Taylor’s job for him for most of the afternoon but could not identify the malice in the game’s worst challenge. He howled in unison with every penalty shout that went up from the home crowd. He never stopped talking to the fourth official Mike Dean throughout the entire 90 minutes. He sarcastically applauded one decision from Taylor, caught his attention in order to mock him with a pathetic fist-pump gesture after City got a handball call in their favour in the second half. Pep refuses to speak about referees in his post-match press conferences but his behaviour towards Taylor on Saturday spoke volumes. He contributed to the febrile, vindictive atmosphere that culminated in the double red card incident at the end. The Etihad was emptying its stands of frustrated supporters who had been convinced by the actions of their manager on the touchline that their team had been done out of a result by the referee. Plenty turned around in the gangways to catch one last look at the dismal spectacle they were leaving behind. It was a pit of paranoia and for that Guardiola has to take responsibility.
He is a man with an almost obsessive attention to detail, according to those close to him, but appeared dangerously fixated with the officials on Saturday. That occupied his attention even as his team were being outdone by goal after goal that had nothing to do with the referee. City played very well for an hour and were definitely worth their one-goal lead by that stage. But the worm began to turn. All of a sudden it looked that Chelsea’s players were out-performing their City counterparts – not on a football level but a physical one. They were running harder and more purposefully. Their starters were beating City’s substitutes in sprints. Guardiola’s team looked like they had run out of gas while Conte’s famously fit team cranked up the pressure led by Diego Costa from the front.
The game lost its structure and therefore the advantage Guardiola’s tactical planning gave them initially. That’s when Chelsea started to find gaps on the break and exploit them. Tired professionals make mistakes and Nicolas Otamendi provided evidence of that time and again. He was caught the wrong side of Costa for the Willian goal; that strike heralded the first day since 2009 that City gave up a goal lead at home in the league and lost. Guardiola included in his programme notes the line “We are ready” in reference to this game and the fact he’d had – for the first time since taking over – a full week to prepare his team for a match. There was no great evidence of that. Sure, City played in a complex shape, made good space for De Bruyne to put in crosses and, like Spurs last week, made Chelsea look ill-at-ease. It didn’t last.
City failed to take their chances when on top. Ilkay Gundogan sent a low cross into the box that was begging in vain for a tap-in; 20 seconds later Chelsea were level. It was with City’s attack that Guardiola’s frustrations were borne out. City have a problem in front of goal. Chelsea had three different scorers here but three different players haven’t scored for City in the same league match since Bournemouth in August. Aguero scores heavily but on an off day, no one will pick up the slack. No other City player has scored more than five goals in all competitions with Gundogan, Raheem Sterling and Nolito on four each. Guardiola cannot win a league with a team that needs 20 chances to score but only has to give up one or two to concede.
This season, it is a two tier Premier League – the top five and the rest. Chelsea, Arsenal, Liverpool, City and Tottenham are covered by seven points. There is a gap of another seven before we reach the league’s sixth place team, West Bromwich Albion. Among that elite group, Guardiola is not doing well. City have faced Tottenham and Chelsea - scoring only once and losing to both. They are the worst of the top five teams when ranked in a mini league. City are the only top five side yet to win against another one in the select group. Guardiola has been unable – with notable exceptions against Manchester United and Barcelona – to make his team consistently play well and win all in the same game. At Bayern Munich he could plan with a deep squad stocked with world-class international players. The same cannot be said for City. He’s got an emergency goalkeeper, one centre back of his own choosing and misfits elsewhere. Guardiola’s football requires near-perfection every time from the players. Right now he’s not getting it.