Check out what Emery said after Iwobi's shoking move to Everton 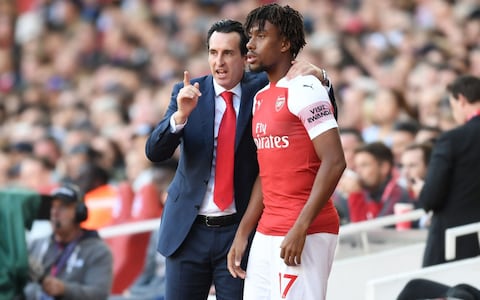 Arsenal Manager, Unai Emery has wished Alex Iwobi good luck, following the 23-year-old’s move from Arsenal to Everton. Iwobi has agreed a five-year contract with Marco Silva’s men, in a deal worth £40million on Thursday.
The Nigeria international has been a Gunner since joining the academy 15 years ago. He came through the ranks and made his senior debut in October 2015.
Iwobi went on to make 148 appearances, scoring 15 goals, winning one FA Cup and two FA Community Shields in the process.
Emery wished Iwobi sucess at Everton, even as he described him as an example to young players.
“Alex has made a big contribution at Arsenal. He worked hard in the academy, where he was an example to many young players and has been an important part of our squad.
“We wish Alex every success in the future. All the best at Everton,” Emery said in a post on Arsenal verified Twitter page.