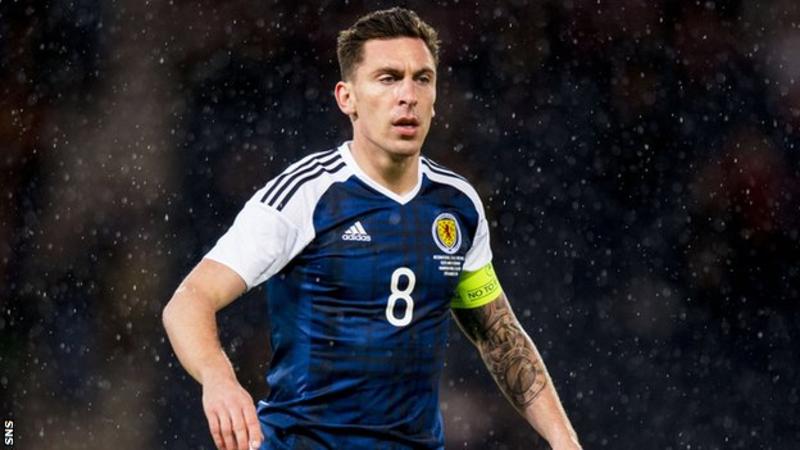 Midfielder Scott Brown has come out of retirement and is likely to be named in Gordon Strachan's Scotland squad to face England at Wembley when he announces it next Wednesday. Celtic captain Brown, winner of 50 caps, spoke to Strachan this week. Brown, 31, retired from international football in the summer but is now prepared to help the team resurrect their World Cup qualifying campaign. His return is not being viewed as a one-off for next month's England game. With three matches played by all teams in World Cup qualifying Group F, Scotland sit in fourth place, behind England, Lithuania and Slovenia, and a point ahead of Slovakia.
Strachan's team won their opening match against Malta 5-1, then drew 1-1 at home with Lithuania and lost 3-0 to Slovakia. On Thursday, Brown, when asked if he regretted not being able to play against England on 11 November, said: "I'll enjoy watching that game, here's hoping Scotland do really well down there. "It'll be another great occasion and I just wish Gordon all the best." In August, when he announced his retirement only 70 days ago, Brown had said: "It's no secret that I've suffered some injuries in my career and once you get over 30 you have to protect your body more. "I'm not the type of player who can coast half-heartedly through a game - I give 100% every time.
"Given the importance of this campaign for Scotland, and the challenges ahead at Celtic, I simply felt that I could not keep up both commitments without either my performances or recovery time suffering." Since then, however, Brown has been a stand-out performer for Celtic and appears to be relishing playing under manager Brendan Rodgers and without the effect of injuries that have hampered him in the past. Motherwell manager Mark McGhee, who is also Scotland assistant manager, welcomed the midfielder's return. Mark McGhee, Gordon Strachan and Scott Brown
Scotland assistant manager Mark McGhee thinks Brown's return "can only be a positive thing". "I was disappointed when he announced his retirement," he said. "He is that type of character that drives other people, that glues people together on the pitch. He helps bring out a team performance, he is a leader and someone who by example and his voice and influence, makes other people better. "My understanding is it is 100% initiated by Scott and him revising his decision, thinking he has more to give." His first game for Scotland came under Walter Smith, against the United States in a 1-1 draw in November 2005. He has never played in the finals of a major tournament, with Scotland's absence from World Cup finals and European Championships stretching back to 1998.