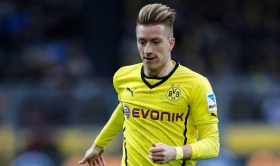 Renato Steffen struck an 80th-minute equaliser as Basel drew 1-1 with Ludogorets in the Champions League on Tuesday. Jonathan Cafu's breakaway goal just before half-time had looked set to secure a first Champions League group stage away win for the Bulgarians before the home side's late pressure eventually told. The Swiss champions had lost only three of their previous 19 home games in European competition and were expected to enjoy a comfortable night against the largely unheralded visitors. Despite dominating for long periods and creating numerous chances, Urs Fischer's side struggled to find a way past Ludogorets goalkeeper Vladislav Stoyanov, who pulled off a string of fine saves.
Birkir Bjarnason, Steffen, Marc Janko and Seydou Doumbia were all denied by Stoyanov as Ludogorets - playing in the group stage for just the second time in their history - defended doggedly to preserve their hard-earned lead. However, the in-form hosts, who have won each of their first seven games of the Swiss Super League season, finally found a way through courtesy of Switzerland winger Steffen to get off the mark in Group A. With Ludogorets content to sit deep and defend in numbers, Basel seized the initiative right from the off and carved out two decent openings in the first six minutes. Bjarnason tested Stoyanov with a low, angled shot and the Iceland international then turned provider, teeing up Steffen, who saw his close-range effort blocked by a cluster of Ludogorets defenders.
Stoyanov was called into action again moments later to keep the lively Steffen at bay, while Wanderson fired the visitors' first chance straight at home goalkeeper Tomas Vaclik midway through the first half. Marc Janko was the next to threaten for Basel as his header from a Matias Delgado corner was blocked, but that proved to be the Austria international's final contribution before he was forced to limp from the fray with an apparent hamstring injury.  And Fischer's men then suffered a further blow as they fell behind on the stroke of half-time. After Bjarnason spoilt a promising Basel move by delaying his shot, Marcelinho led a swift Ludogorets counter-attack that culminated in Cafu shrugging off the attentions of Marek Suchy and calmly slipping the ball past Vaclik.
Basel responded by laying siege to the visitors' goal immediately after the break, with Doumbia's header drawing another save from Stoyanov, but they appeared to be running out of ideas as the second half wore on. With the home fans becoming increasingly frustrated, Ludogorets seemed set to secure an historic victory, only to be denied 10 minutes from time. Stoyanov managed to palm Bjarnason's cross away, but only as far as Steffen, who hooked the ball home at the far post to ensure a share of the spoils.