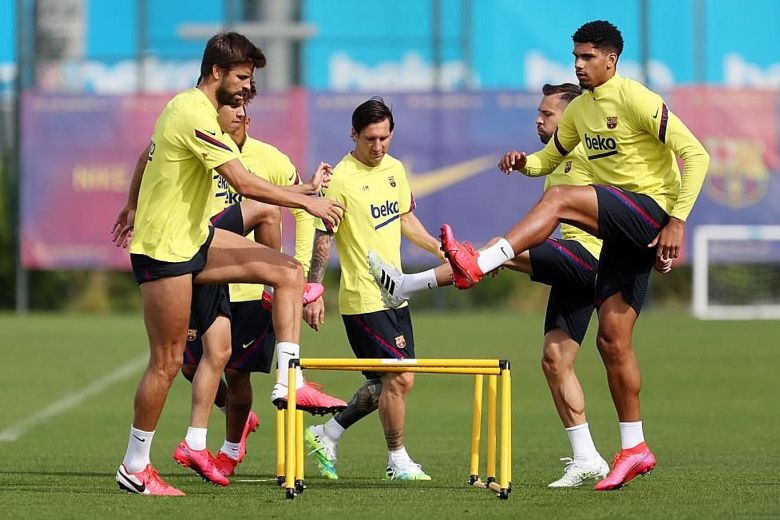 Summer of 2020 may not be a great one for sports fans, but there are still leagues that are ready to make the remaining time count. In particular, Spanish football fans have been restless as they not only await news from their domestic league, La Liga, but from the entire UEFA.

On March 23, 2020, La Liga season play was suspended indefinitely. At the time, top clubs were nearing their way toward finals in May. As it stood at the time of the season’s suspension, Barcelona FC led with 58 points. Real Madrid followed with 56, then Sevilla with 47, and, in fourth, Real Sociedad with 46 points.

Since La Liga announced its return, set for June 11, 2020, fans of the Spanish league rejoiced and started to wonder what teams have been doing to keep in shape during their time off. And, more importantly, how that fitness regime will help each team win their eleven remaining matches.

As one of the world’s most premier football clubs, there is ample curiosity to see how Barça will take the pitch after a long and unexpected break. But there’s more going on behind the scenes than players working out and fans speculating. Betting sites like Unibet are offering $500 deposit bonuses to draw fresh crowds to football action, while streaming services like beIN SPORTS are preparing for massive numbers of remote viewers for Barça’s return match against RCD Mallorca on 13 June.

La Liga's remaining eleven matches per team, set to begin on June 11th, will be played in empty stadiums. This factor has not only led to more than one psychological factor contributing to the team’s game readiness but also complicated the deals with streaming services.

While beIN SPORTS is one of the most popular streaming services to bring La Liga to living rooms across the world, Barça has also created its own streaming platform that’s designed to bring fans closer to the action—especially considering Camp Nou will continue to be empty well past the 100-day mark.

As the team prepares on the pitch for the restart of their La Liga season, Barça’s other departments have been busy at work perfecting the team’s streaming service off the field.

Known as Barça TV+, the franchise-focused streaming platform costs just €4.99 per month. Not only does it come with over 1,000 hours of exclusive footage, but it even includes top features from Barça’s women’s team.

However, Barça TV+ isn’t merely the franchise’s response to the recent league suspension. In fact, FCB began their own TV channel (FC Barça TV) over 20 years ago. Sure, executives are hopeful that the streaming platform will add to the club’s popularity and increase fan engagement—but they’ve also got their eyes on profits.

The club features Europe’s most competitive footballers, but still, it has recently posted losses based on their operating costs. And this is despite the fact that, in 2018, FCB became the first soccer club to make more than $1 billion in revenue (€990 million).

So, as Barça preps for play, Messi and Pique aren’t the only ones working up a sweat as behind-the-scenes executives and marketing minds attempt to harness the wallets of the club’s some 350 million fans worldwide.

Considerations on the Pitch

Extended absence. Barcelona hasn’t played since their last game against Real Sociedad, and by the time the team takes the pitch in Mallorca to play on June 13th, the team will have gone 98 days without a match.

This sort of delay unprecedented, and it hasn’t happened in nearly one century of play. In fact, the last time La Liga was suspended was in 1939. At this time, Barça FC went 172 days without playing—half a year.

Luckily for the club, their return to the pitch in 1939 went well: they defeated Athletic with a staggering score of 9-1. The game was also played in June (29). While it’s hard to imagine top players like Griseman or Suarez returning to the field out of shape, it should be noted that the remaining La Liga games will be played in the brutal summer heat.

Modified rules. In addition to the unforgiving Spanish summer, players will be working under a different set of modified rules in La Liga. Luckily for the team, rules have been altered to take into consideration the players' absence as well as the climate.

Going forward, teams will be allowed five substitutions rather than the usual three. This is designed to also alleviate players, given that the remaining eleven matches will be played in quick succession and allow less time for legs to recover.

La Liga will also continue with a 23-man squad versus the usual 18-man roster. This adjustment was made to align with the five-player substitution increase. This means that coaches have been busy reorganizing their rosters and shifting players, which means fans could be in for some interesting position swaps.

Psychological considerations. As play continues on at breakneck speed before the La Liga championship (likely) takes place between Barça and Real Madrid, there are quite a few psychological obstacles for players to maneuver through if they want to give their best on the field.

First of all, players have to come back as a team and play seamlessly despite the unexpected and extended absence. Second of all, they’ll be playing in empty stadiums, which could present unforeseen differences in play.

And, lastly, La Liga will continue on with the expectation that Barça will face off against Real Madrid. While there are still 33 points left to play in La Liga and the current standings are by no means final, this anticipated showdown transcends the hype generated by the La Liga’s absence.

In fact, this is a showdown the football world has been waiting for since it was confirmed that Cristiano Ronaldo would be moving from Real Madrid to Juventus. Now that the leading goal scorer and captain has switched squads, many will look to Barça to ascend their rightful place as the undisputed leaders of Spanish club play.