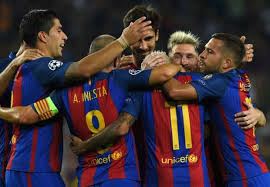 Barcelona thrashed Celtic 7-0 at Camp Nou in their opening Champions League game on Tuesday, with Lionel Messi netting a superb hat-trick. The Spanish giants ran riot against Brendan Rodgers' men, and truly put Celtic to the sword in the second 45 minutes. Messi scored twice in the first-half to give Barca a commanding lead, and Neymar then added a third before Iniesta netted the goal of the night, dispatching a superb volley to make it 4-0.

The five-time Ballon d'Or winner then completed his treble on the hour mark, and Luis Suarez sealed the victory with two late goals to truly complete Celtic's humiliation.