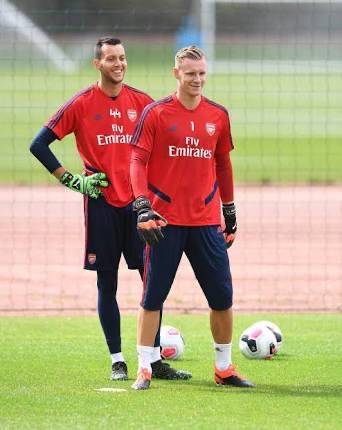 Arsenal have confirmed that their goalkeeper, Dejan Iliev, has left Emirates to join English side, Shrewsbury Town until the end of January 2021. This is coming less than a few hours after Arsenal manager, Mikel Arteta, included Iliev in the Gunners’ Europa League squad for this season.

Arsenal made this known in a statement through their official website on Thursday. The statement read in part: “Iliev joins Shrewsbury Town on loan.
“Dejan Iliev has joined League One side Shrewsbury Town until the end of January 2021. Everyone at Arsenal wishes Deyan all the best for his time at Shrewsbury Town.”
Iliev, 25, recently returned from a loan spell at Polish top division side Jagiellonia Białystok. He signed a new deal in July 2019 last season before spending time on loan in Slovakia with Super Liga side SKF Sered.”