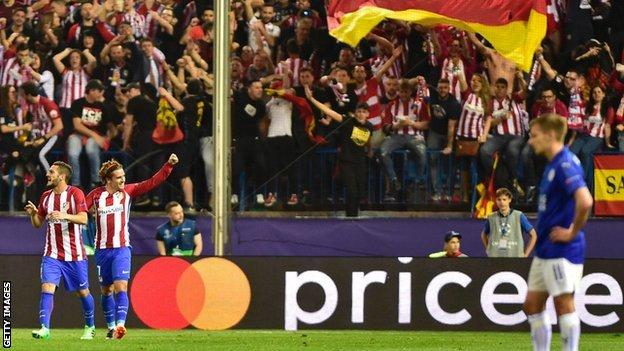 Arsenal goalkeeper David Ospina proved integral to a 1-1 Champions League draw against Paris Saint-Germain as both teams finished the match at the Parc des Princes with 10 men. A string of excellent saves from Ospina ensured the Gunners left the French capital with a point against their Group A rivals, with a second-half stoppage-time coming together between substitute Olivier Giroud and Marco Verratti resulting in red cards for the duo.  After two Ligue 1 matches without a win, coach Unai Emery made eight changes to his line-up and two of them combined for the opening goal when Edinson Cavani nodded home a cross from Serge Aurier after just 42 seconds.
Arsenal struggled to create opportunities and could have fallen further behind had it not been for Ospina, selected ahead of Petr Cech, denying Aurier, Cavani - who missed an open goal at the end of the first half - and Angel Di Maria in the second period. The introduction of Giroud in the 63rd minute enabled Alexis Sanchez to play with more freedom from the wing, and the move paid off as the Chilean thrashed in an equaliser in the 78th minute to ensure the spoils were shared. Three-time Europa League winner Emery was drafted in as the replacement for Laurent Blanc in a bid to bring European success to Paris.
And he surely could not have hoped for a better start to the continental campaign than Cavani getting between the Arsenal centre-backs to head home Aurier's right-wing cross with just 42 seconds gone – the earliest goal the English side have conceded in their Champions League history. Arsenal gradually gained a foothold in the match and used the wings well, but 23-year-old PSG goalkeeper Alphonse Areola, making his Champions League debut, remained untested in the first half. And Cavani could have sent PSG into the break with a deserved two-goal cushion. After missing the target from 15 yards having latched onto Verratti's deflected pass and rounded Ospina, the Uruguayan was unable to connect with a volley after controlling Di Maria's chip over the defence on his chest.
Di Maria had a chance of his own within 10 minutes of the restart, but Nacho Monreal did enough to put him off inside the box, his appeal for a penalty waved away by referee Viktor Kassai. Arsene Wenger sent Giroud on in place of Alex Oxlade-Chamberlain, a move that enabled Sanchez to move out wide. Improvement was initially only fleeting, with Ospina racing off his line to deny Aurier before thwarting Cavani, who beat Laurent Koscielny but could not add his second with 21 minutes remaining. The Colombian then kept out Di Maria and his efforts were not in vain as Arsenal drew level when Sanchez thumped home after Areola made a great reaction stop to keep out Alex Iwobi.
Arsenal were left to rely on Ospina once more to secure a point, the goalkeeper diving at Cavani's feet and getting a crucial touch on the ball to steer him away from goal. There was a sour note for both teams come the final whistle, though, with Giroud diving in on Verratti and sparking a disagreement that resulted in the pair being dismissed. Marquinhos then missed a chance to win it when he headed wide at the back post in the 95th minute.