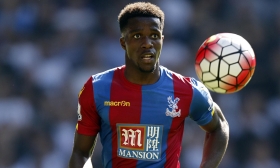 The Arsenal midfielder suffered food poisoning ahead of his maiden outing for the Super Eagles in Kaduna in March, but it was not premeditated says his dad
The father of Nigeria forward Alex Iwobi, Chuka, has refuted a recent online report in the Nigerian media that claimed his son was “intentionally poisoned” ahead of making his competitive debut for the Super Eagles in March.
Iwobi showed up at the Kaduna camp of the Eagles with pressure from England where there was faint hope of still bringing him back to the Three Lions.
That hope of a U-turn was fueled when the 20-year-old landed in hospital after eating something that troubled his stomach.
This weekend, it was reported that Iwobi told Usman Sale, a Nigerian player on the Viking FK team during jersey exchange following their pre-season friendly against Arsenal, that he thought he was “deliberately” poisoned.
“I exchanged jerseys with Iwobi after the game, we discussed about life and Nigeria,” Sale was quoted by allnigeriasoccer.com.
“He said some people deliberately tampered with his food while he was in Nigeria for the Egypt game, and he was rushed to the hospital.”
However, Iwobi’s father has come out in defence of his son, calling the story mischievous. Chuka claimed that his son could not have made such a statement.
“Alex made it clear to me that he did not say anything about his food being poisoned to the Nigerian Viking player,” Chuka Iwobi said in a statement released by the Nigeria Football Federation that was made available to Goal
“To quote Alex – ‘We only swapped jersey took pictures [and] he said he is Nigerian, we didn't talk anything about food.’
“I was in Nigeria at the time when Alex had the stomach upset and Alex told me in Nigeria that he reacted to something he ate and he made no allegation of foul play.
“This is total mischief making and I do not know the source,” said the father.
After being released from hospital, Alex went on to make his competitive Nigeria debut against Egypt in an Africa Cup of Nations qualifier, thereby sealing his international future with the Super Eagles.
He was expected to be part of the Nigeria U23 team to the 2016 Olympic Games in Rio de Janeiro but was not released by the club.
“Alex loves Nigeria and as you are aware would have been at the Olympics if Arsenal released him,” Chuka Iwobi said.
“Arsenal will release him during the international break for the World Cup qualifiers (if he is invited).”
Iwobi has been a key part of the Arsenal pre-season where he scored twice in the 8-0 defeat of Viking during their tour of Scandinavia.
He is expected to play against Manchester City in a friendly in Gothenburg on Sunday evening.