Ahmed Musa scores brace in their defeat against Barcelona 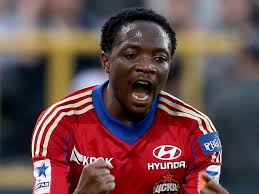 Ahmed Musa came off the bench at half-time to score twice in Leicester City’s 4-2 defeat to Barcelona in Wednesday’s International Champions Cup played at Friends Arena, Solna, Sweden.
Musa joined the Foxes from CSKA Moscow in the summer, and has a reputation for scoring remarkable goals.
A double from Munir El Haddadi and a strike from Luis Suarez had put the Blaugrana three goals up in the first half, but the Nigerian attempted a comeback for Claudio Ranieri’s men after replacing Demarai Gray.
His introduction was among a raft of substitutions made by Ranieri at the interval and the Super Eagles’ star struck two goals as he bids for a regular shirt with the King Power Stadium outfit.
Musa is expected to feature for the English champions when they face Manchester United in the FA Community Shield on Sunday.